Some more Photographs from Hamish Stewart

Here are some more great photographs from a fellow urban flâneur, Hamish Stewart with his comments:
I recently spent an afternoon wandering around Granary Square in Kings Cross London – a new public space arising out of the goods yards and sidings that surround the Victorian railway station.
Granary Square is just a one part of a vast re-development of central London.  From 67 acres of post-industrial landscape a new district is arising from the detritus of the 'railway lands' that were build in the 1850s and 60s.
New streets and public squares are being created as well as thousands of new homes, and a university campus. Granary square is host to the new campus for the University of the Arts, social housing and the Global Generation Skip Garden – which uses the symbol of re-construction, the skip, to provide a new home for a garden in a landscape of cranes and barriers as the 'railway lands' are re-born for a new purpose.
If you want to find out more visit http://www.kingscross.co.uk/
Le Flaneur – the random urban photographer
http://www.le-flaneur.co.uk 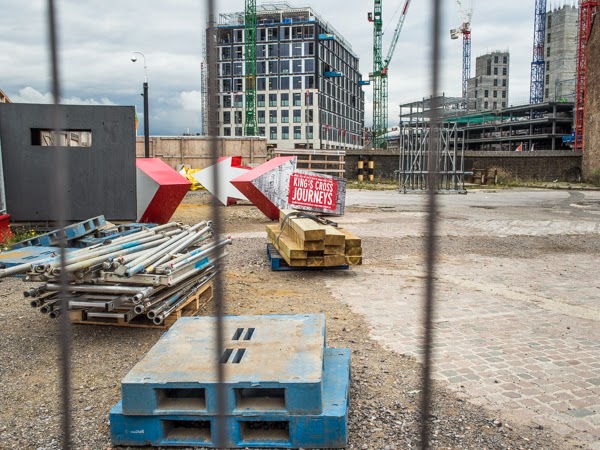 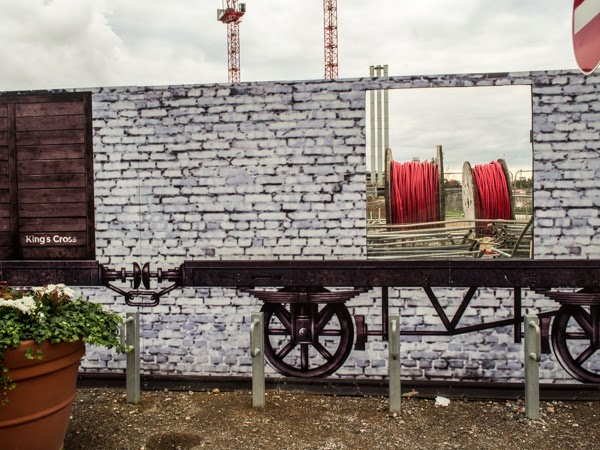 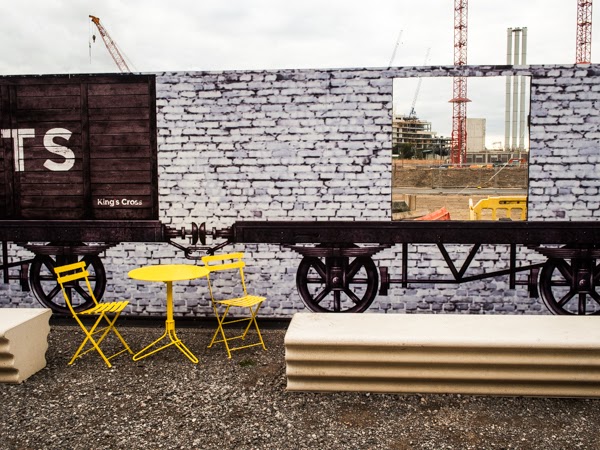 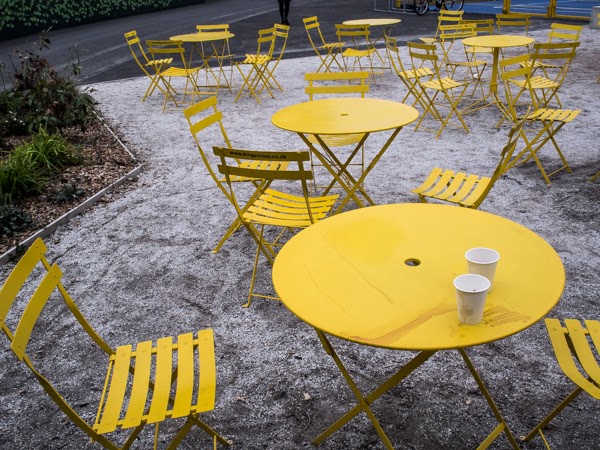 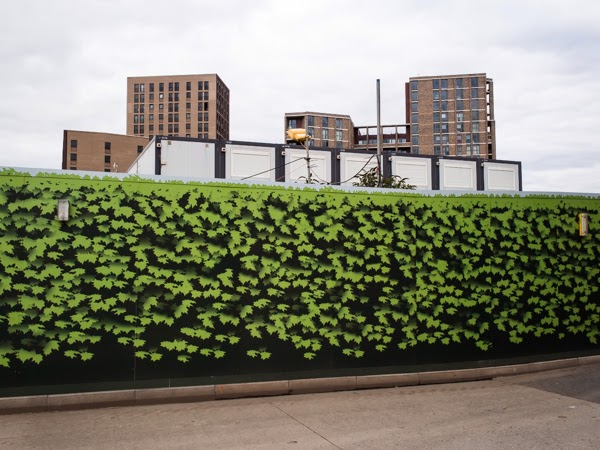 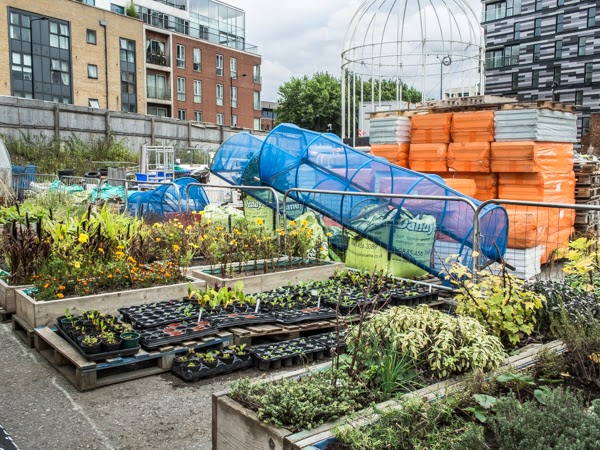 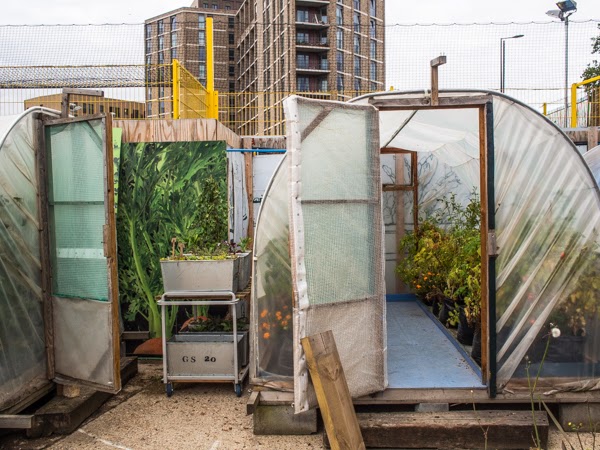 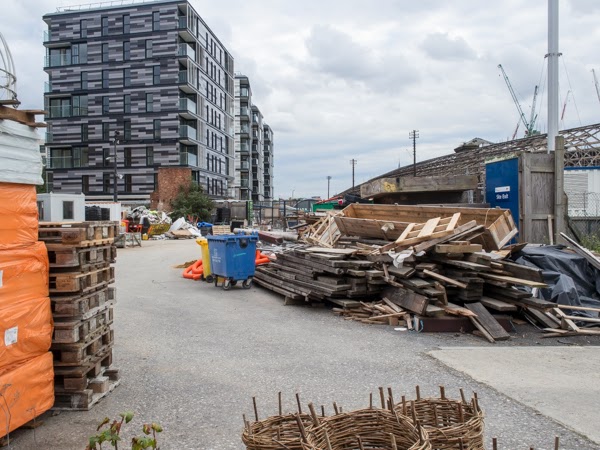 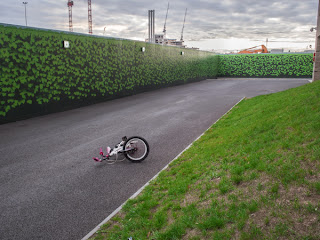 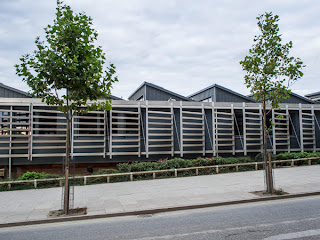 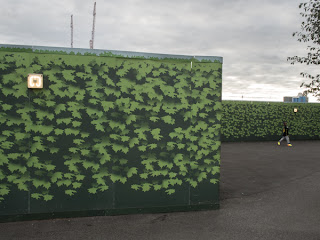 Here is something that baffles public officials, the cleaning of surfaces to create 'reverse graffiti' art. It is anarchist in nature because: How can you prosecute a person who cleans wall to create art."  Can this be considered vandalism?  Those who are urban flâneurs see the humor in such graffiti.

Here are a few examples of reverse graffiti (the links also contain some interesting narrative): 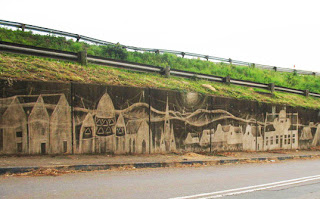 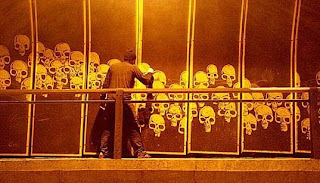 (Alexandre Orion – Skulls in  São Paulo, located at: http://www.environmentalgraffiti.com/featured/35-greatest-works-of-reverse-graffiti/1949?image=20 ; the other images in this slide show are also noteworthy.) 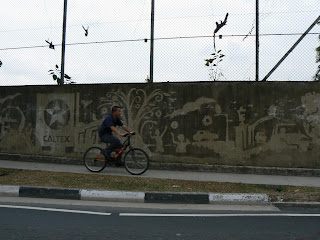 (Singapore: located at: http://1outdooradvertising.blogspot.com/2009/01/reverse-graffiti-by-caltex.html;
what is surprising is that this is a legal advertisement.)

More to Be Added! 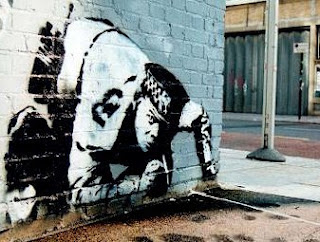 In one of my past blogs, I posted some examples of urban graffiti with commentary.  On various groups on Linkedin, I posed questions about urban graffiti for the professionals on this site.  All of the responses were heartfelt and many were eloquent; varying from statements exclaiming its social message of graffiti to stating it was vandalism and against property rights.   Here are some of the selected comments in one location:

Only if it is actual art and not just people writing their names or an insult. Glasgow is covered in graffiti a portion of which is the latter. I wouldn't mind lots of funky art! I just don't want to know all the local kids names or what they think about the police. If they want to protest they should learn how to produce proper art... smART protesting only please!

To an artist spray paint can be a medium, not the statement. Picking a disused, dismal or ignored corner of a city to work with can be the message: "Hey, look here! You've been walking/driving by this corner all year -- do you even know this place matters?" Curated, sanctioned public art is usually more decorative: "Isn't this pallet more pleasing than the dirty bricks and cement underneath?" You can same the same about public sculpture cast in steel or bronze versus assembled out of less permanent or valuable materials. It's not the point of the exercise.

Hmmm...interesting thoughts. There are probably more questions than answers in the article which would open up several topics for a master's thesis. For instance, is there a population density at which this happens? If so, why are only a small cohort of the citizenry involved? Should advertising in public spaces be banned? Should there be a limit imposed on population density? Should there be constraints imposed on morons who vandalise private property? Should we open up advertising spaces for graffiti?

In Australia we had a subversive group called buggaup or bugaup who attacked billboards that advertised unhealthy products such as cigarettes, alcohol, coca cola etc. Some of these activists have gone on to become public servants and one is a serving state politician. See http://www.abc.net.au/gnt/history/Transcripts/s1248541.htm  and http://www.bugaup.org/
I guess that we could say that these people were using humour to perform a public service, but can we say the same thing about the mindless tagging etc that is claimed as art?

…space is increasingly devoted to commercial messages and advertising – communication that is exclusively one-way: the public is being spoken at, in areas where the social expectation is one of shared interactions between people, so the same is expected of the shared visuals of the areas. So the one-way visuals and communications of the city run in opposition to the instinctive behaviour of people in the city. Therefore people are increasingly reversing the communication streams of the city and are communicating back.

So far, this process has largely occurred through subversive and marginal activities as people take individual action to shape their own urban spaces, to surround themselves with adapted objects and visuals in the urban environment with the same passion usually applied to domestic spaces.
Forward by commenter from:  http://www.ciudadesaescalahumana.org/2008/04/creative-citywhen-do-we-actually-get-to.html

Urban graffiti shouldn't be viewed of as an either/or situation (good/bad, public art/not), it would e helpful to think about the causes of it. One point to keep in mind is that urban graffiti is also a form of expression of those who feel silenced or have no voice in the bureaucratic/political system surrounding them.. it can be an informal form of engagement by communities and individuals. I agree that defacing public/private property is unlawful, but when there aren't resources for, or these people aren't satisfied with the current environment of things, they need a form of outlet, and some take to this because it's either what they feel they can immediately do, or be a part of, have a sense of control over. An interesting documentary to look at is a documentary called "Style Wars" which looks at urban graffiti (and subsequently the hip-hop movement) in a more in-depth manner.

Sometimes art is destructive. But just because something is art doesn't mean it should be granted impunity. Civil disobedience is at the soul of graffiti, and all of the graffiti artist I know have been arrested. Os Gemeos started out painting illegally on public infrastructure before they were commissioned to do it legally. However, there is value in these works of disobedience. While some works of graffiti tastelessly deface property, others are placed on vacant properties in disrepair or on large works of public infrastructure. Some governments, like São Paulo, have commissioned artists to cover their plain cement walls with art. But in my mind, this really detracts from the spirit of graffiti artists, which is essentially a protest to the established institutions. Many graffiti artists state that they began tagging buildings just to say, "I'm here." I found much of the graffiti covering the city of Rio de Janeiro to be provocative and beautiful.

So to answer the original question, yes. And all we have to do for that to be a reality is start appreciating the good ones.

Vandalizing private property is never art...it is a crime and should be punished.

Check out the movie "Exit through the Gift Shop". There is a difference between graffiti and street art and when it is done right, it can be extraordinary. What I loved about this movie was that shed light on the most public - but anonymous - form of self-expression. It is a quirky movie, but fascinating. Also, Philadelphia has a non-profit called the Mural Arts Program that paints amazing murals on buildings throughout the city. (“Exit through the Gift Shop” is a documentary by Banksy )

Each safety-wall put up by a private developer, during construction, chould be offered as a location for a graffiti competition

Art is something created by an artist, public art is art that has been created in a public space with the permission of the public authority and/or the owner of the property. Taking to private property with a spray can without the owner's permission is criminal vandalism and demands punishment.

It is a waste of time and paint but graffiti is like cancer; it spreads. I agree. What is the point of wasting time by doing an act that is illegal and destructive, and will be removed within 14 days?

So who wants graffiti all over their city? Not me. I feel that the more we stand up to graffiti, and work together to find solutions to deal with it, the cleaner and richer our city would be for everyone.

Graffiti spans from the banal to the truly artistic. The evidence of graffiti signals that the general society and particularly that in urban areas is experiencing economic and social chaos. Those that are amateur or professional graffiti artists are expressing impromptu protest against government and a society which they feel is alienating them and the general public. It is meant to provoke. A local government may clean the walls of graffiti temporary, but until social and economic issues are addressed by local and national governments, it will always return. Essentially, most citizens and governments want to 'whitewash' the underlying problems behind graffiti because it is simplistic and means that they do have to deal with the underlying societal and governmental issues.

Regents Canal in London runs from Paddington to Limehouse basin on the Thames. Through its journey it passes through the splendour of Regents Park but also through the areas of re-generation around Hackney.

These images follow a walk along the Regents Canal from Camden to Victoria Park near Mile End. It takes in recent changes to the area around Kings Cross station and then along the Canal from Islington to Hackney where new housing developments, council estates and a decaying industrial landscape define an urban landscape that is undergoing a rapid period of change. It reflects a broad gentrification of the East of London and a reminder of the constant tides of re-development and change that have marked London over the centuries. 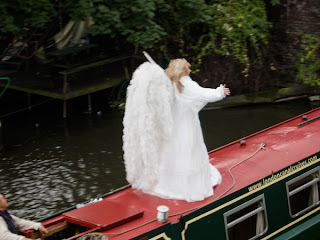 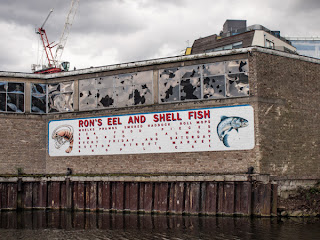 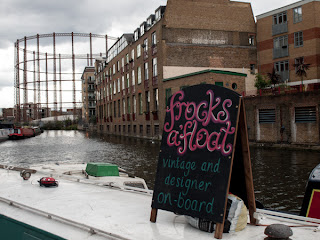 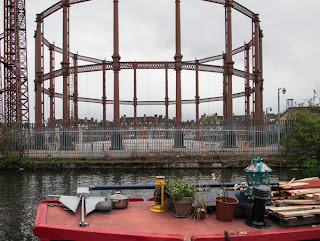 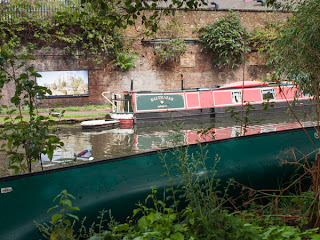 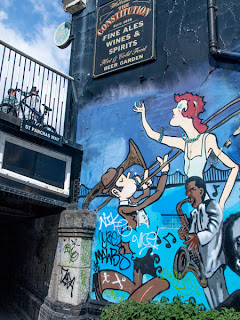 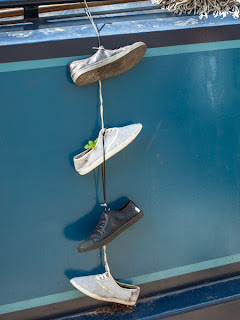 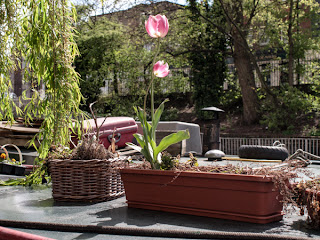 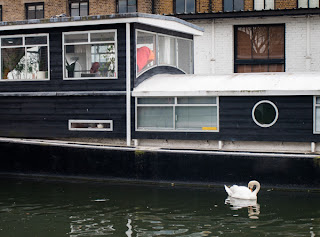 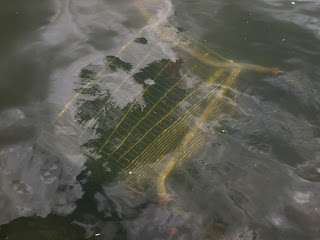 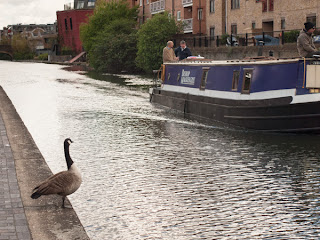 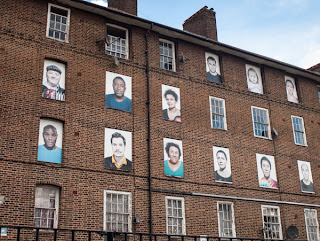 Posted by Michael A. McAdams at 7:55 AM No comments:

The Café: an essential stopping place for an urban flâneur 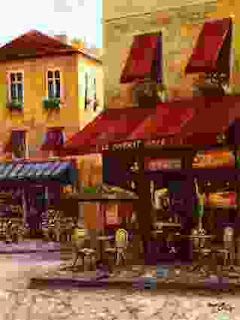 When an urban flâneur becomes weary of wandering the streets, s(he finds himself a café that offers the best vantage to observe the outside street and the inside activity.  The flâneur always has in her/his possession, a book, a notebook and maybe a camera if s(he is an urban flâneur photographer.

The flâneur makes reads furtively when the scene is boring or writes in a notebook of his/his observations, but is always watching the inside and outside activity.  Sometimes, s(he is fortunate to overhear conversations.

The following might be some of the observations of a flâneur while siting in a  café:

There is the couple looking at webpages on a laptop

Another couple are holding hands across a table and talking quietly.

A student who is reading a textbook in the corner.

The old man who is circulating from table to table stricking up conversations with whoever will listen.

The young mother with a young child in a stoller having a pleasant a conversation with a friend.

On the street, people are passing on the sidewalk.

The young teenage with a mobile in his hand talking in earnest with a friend while walking down the street, oblivious to the surrounding environment.

And.. there is one of your friends walking up and sitting down at your table.

Such is the varied, complex and rich environment that the urban flâneur observes contemplates..  and participates. A café represents a microcosm of the neighborhood and city that sh(e resides or is visiting. It can tell about it composition and diversity, giving insight to its participant observer..
Posted by Michael A. McAdams at 9:42 PM No comments:

Every click helps to support this blog and its poor author.

Donate to this Blog